Rome, 25 July, 5:30 p.m. – The Board of Directors of SACE (CDP Group), chaired by Beniamino Quintieri, approved today the 2017 half-yearly results.

The recovery of global economy, but also uncertainty related to geo-political risks, neo-protectionist policies and volatility: in this complex scenario, SACE and SIMEST, which together form the Italian Export and Internationalization Hub of the CDP Group, have mobilized resources for € 7.8 billion, 19% more than in the first half of 2016.

This growth is expected to continue during the current year, due to the great increase in insurance-financial activities: after a 30% growth in 2016, the Hub has approved new operations - whose completion is expected in the coming months for 16.6 billion euro (+ 72%). 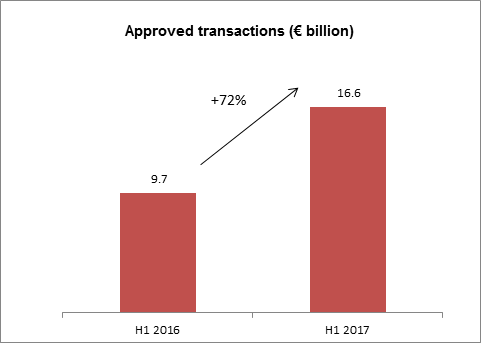 This strong increase of the activities is in line with the business plan objectives and has been achieved in compliance with the principles of economic and financial sustainability, maintenance of financial solidity and portfolio risk profile.

“We have closed the first half of 2017 with highly positive results, due to the strong dynamism of Italian companies, the teamwork promoted by the government, and the commitment of the Export and Internationalization Hub of the CDP Group,” affirmed Alessandro Decio, SACE CEO and General Manager. “We achieved these results thanks to the contribution of all the companies of the Hub, which we hope will be confirmed in the second half of the year, with a significant growth not only in export credit but also for what regards support to internationalization. We are currently involved in strengthening our distribution network and further improving our products and service models, in order to provide our companies support within a context of economic and financial sustainability.”

In the last six months, SIMEST integration in SACE has been fully completed, implementing a new organizational model and launching a Push Strategy, a program through which potential foreign buyers by 2020 will receive € 4.5 billion of credit lines at competitive rates for the purchase of Italian goods and services. All these initiatives, along with the product simplification, the digitalization of the services, and the strengthening of the commercial network, will enable the Hub to improve the accessibility to its offer and the quality of its services for a growing number of businesses already in the coming months.

Transactions approved by the Hub during the period

Among the € 16.6 billion of transactions approved in the first semester, 79% were generated by activities managed by SACE, the remaining 21% by the operating companies.

Regarding the new transactions approved by SACE (€ 13.2 billion), a particular dynamism was registered in the Middle East, which accounted for half of the initiatives, followed by Sub-Saharan Africa (€ 1.2 billion) and the Americas (€ 3.6 billion). Among the sectors, ship construction and cruises, oil and gas, infrastructure and construction, and capital machinery.

SIMEST approved € 231 million in new transactions, equal to 1.4% of total volume, primarily in low-interest loans and equity investments. It also provided —through grants in interest— support to export credit transactions insured by SACE for a total amount of € 8.3 billion.

The turnover developed by SACE FCT amounts to € 1.8 billion euro, equal to 11% of the total amount, in addition to € 400 million in credit mobilized in cooperation with the Group.

Through its credit insurance and security activities, SACE BT generated € 1.4 billion in revenues, or 8.4% of the total.

Premiums. Support to export and internationalization provided by SACE, primarily regarding medium/long-term initiatives in medium-high risk markets, have generated gross premiums of € 258 million, 4.5% more than the first half of 2016.

Claims paid. A total amount of € 129.9 million of claims were settled (-35.1%), primarily referring to export credit transactions with counterparties located in Ukraine and Iran. Metallurgy and shipping were the most involved sectors.

Net profit amounts to € 147 million, – dropped slightly compared to the same period of 2016 - with an annualized ROE of 6.5%, slightly better than what forecasted in the Business Plan.

Net consolidated profit, according to IFRS-IAS principles, amounts to € 229.8 million, rising from the € 102.9 million recorded in the first half of 2016. All the operating companies recorded positive results for the period, contributing € 9.8 million to consolidated net earnings. More specifically, SIMEST contributed for € 4 million, SACE FCT for € 4.3 million, and SACE BT for € 1.5 billion.